Today we’re talking to “Go-To Global Gal” Alyce to learn a little bit about her, her experiences, and how travel has impacted her life. We’ll also be interviewing other Global Gals team members in the future, so be sure to keep an eye out for more “Get to Know” features!

What do you think has been key in leading you to pursue international travel? Where did your love of travel come from?

Alyce: Besides a natural sense of curiosity and an inquisitive nature, I think there are two things that inspired and led to my love of travel, planting the seed of wanderlust in my heart.

When I was only two years old, my parents decided that they wanted me to have the opportunity to be bilingual. My dad was a cultural anthropologist and my mom was a teacher. They wanted me to develop a love and appreciation for other cultures. They started me on the BBC Muzzy tapes designed to help children learn French. The very first time I watched them, I started spouting French and they realized that I might have “the ear” for languages. In fact, I was so in love with the French lessons that I would choose them over Disney movies!

With only the tapes and no one to practice with, my skills at French were limited, but it did serve to inspire a life-long appetite for language learning and over the years I spent time studying a number of languages including Spanish, Chinese, Japanese, Hindi, and Korean. Speaking someone’s language is a great way to learn about other cultures and countries, and so this love of languages helped lead me to travel.

The second thing was that my parents instilled a sense of wanderlust in me from a young age because of how they approached moving and travel in general. When I was young, we moved around a fair amount, crossing a lot of state lines in the process. My parents made moving an adventure, so instead of dreading the loss of friends, I looked at moving as an epic step in my life story—a magical chance to meet new people, see new things and try new experiences. I came to enjoy moving, and now as an adult I actually crave it—if I stay in one place longer than a year, I start getting restless. People often comment on the fact that being a military spouse must be hard because of the moving, but the reality is I move far less as a military spouse than I did when I was single. For a time, when I was single, I moved once a year! 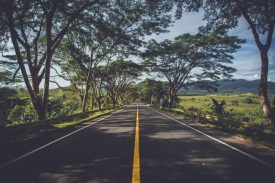 My parents also loved to go on road trips and they would constantly pile us in the car with a cooler full of drinks and snacks, and off we’d go on another “grand adventure.” My mom’s ancestors were Roma (an ethnic group of people, more commonly known as “gypsies”) and she has always embraced the more “bohemian” lifestyle, instilling in us the ability to welcome spur of the moment decisions and trips, or change our plans at the drop of the hat. This love of travel, and being able to see moving or travel as a wonderful part of the “adventure of life,” helped me grow into a flexible traveler who’s eager to learn, meet new people, and collect new experiences—whatever they may be. My willingness to deviate from “the plan” and make seemingly impromptu decisions has led to some of the best experiences and trips of my life.

Where did you go on your first international trip? How old were you? 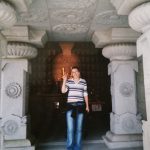 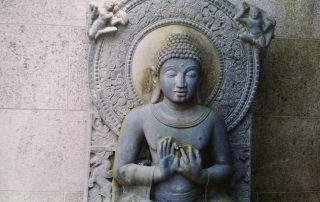 Alyce: My first international trip—and my second time flying—was when I was 17, during the summer between my junior and senior year of high school. I flew by myself to Japan, landing at Tokyo’s Narita Airport, where I met my Japanese friend who’d been an exchange student in Iowa. I rode the bullet train with her and her family and eventually we arrived at their home in a rural village called, Kawakami-mura (about two hours by regular train from Ōsaka). I stayed with them for a month, doing my best to navigate a country where I spoke very little of the language. Even more, the locals spoke no English and had almost no experience meeting or speaking with a foreigner so there was a lot of staring, pointing, and curious questions. It was truly a life-changing trip! (Left & Right: Photos taken at a Buddhist temple I visited on one of my last days during my first trip to Japan.) 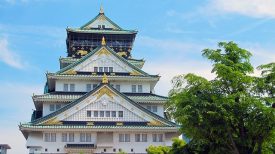 What is your favorite language of the all languages you have studied?

Alyce: If I had to go by sound, I would say my favorite language, out of all the languages that I’ve studied, is Hindi. To me, it is an incredibly beautiful, lyrical language. I just love the way it sounds. But if I were to go with which language I’m most comfortable speaking and most fluent in it would be Japanese. (Right: I first visited Osaka castle when I was 17, but visited it again when I was an exchange student (21 years old) and when I was an English teacher in Seoul (26 years old). )

What other places have you traveled to outside of the United States? 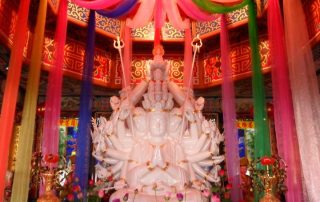 Alyce: I’ve been to Japan on four different occasions, one time being when I went to Japan as an exchange student (for one year). Other than Japan, I’ve also lived and worked for a year each in Taiwan—in a city about one hour southwest of Taipei—and in Seoul, South Korea. This year I returned to Korea for a long-awaited visit. I always seem to be traveling to Asia, but later this month, I’ll be visiting the Dominican Republic and enjoying my first trip to the Caribbean!  (Left: Shrine at a temple that I passed every day on my way to work in Taiwan.) 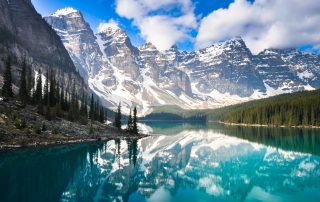 What destinations are at the top of your “bucket list”?

How has travel changed you? 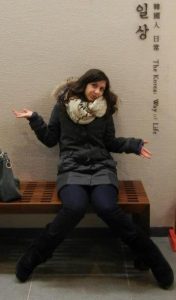 Alyce: So many ways! It’s difficult to list every way it’s changed me in such a small space, but if I could list a few things they would be:

1. Patience – Travel taught me that good things take time, but they’re so worth it in the end. Even more, it taught me how to make the journey just as much of an adventure as the actual destination.

2. Tolerance – Travel and the exposure to other people, cultures, and languages, has helped me grow as a person and learn to be more open-minded, tolerant, and accepting of differences.

3. Self-confidence – My travels have put me in situations that were stressful. But they were also character building; they pushed me, tested my mettle, and in the end they showed me just how strong I really am—stronger than I could have imagined. Through travel I gained a level of self-confidence that I don’t think I could have otherwise.