Flying with Wine in Your Luggage

Flying with Wine in Your Luggage

I’ve flown across the US and across the Pacific to Asia numerous times. Though, I still have yet to fly east—my trips outside of the US seem to be permanently westward-bound, but hopefully sometime soon I’ll change that directional habit. (Italy and Greece are on my “bucket list”!) Either way, I’m used to flying long distances. I understand well how battered and beaten my checked luggage can be by the time I arrive. I’ve seen the videos of those luggage shoots and conveyor belts spitting out suitcases, or zipping them around the giant, factory-like rooms where they get sorted and sent to the bellies of their designated planes. I’ve also seen the way some of the stockier employees at the check-in counter have literally tossed my suitcase onto the conveyor belt with nothing but a careless roll of the shoulders. (While I admire their strength, the sight always makes me wince.)

So perhaps you can understand why—cautionary person that I am—I have always been too chicken to even entertain the idea of flying with wine packed in my luggage. All I could think of was the giant disaster of a mess that a single shattered bottle of wine could wreak on the contents of my suitcase. And I figured that, with my hysterically bad luck, it would break. I’ve always deemed it, “not worth the risk,” as much as I loved the idea of taking wine as a gift or bringing wine home from a trip.

But this year, I got a little gutsy. Perhaps it was thanks to desperation, determination, or pure recklessness—I still haven’t decided. I was traveling to Seoul (South Korea) again for the first time in four years to see and stay with one of my dearest friends, Yeondong. Ten years ago, we were thrown together—as fate would have it—as roommates while studying abroad at Kanda University of International Studies in Kaihinmakuhari, Japan (a suburb between Tokyo and Chiba). We’ve been close friends ever since. In every way she became like a sister to me. While I was living in Korea four years ago, her family took me in, inviting me over for dinner, letting me join them during holidays and other traditional celebrations, and overall, making sure that I felt welcome and loved. I adore Yeondong and her family and so, in order to bring them the best gifts I could possibly find locally (since local food stuffs from wherever you live are generally an appreciated gift in parts of Asia, especially when visiting friends), I dared to do the one thing that I’d always thought was just asking for disaster.

I bought a bottle of wine and two bottles of balsamic vinaigrette—locally grown and made—in Temecula, California (the “mini-Napa Valley” of Southern California). Yeondong’s father loves wine and enjoys trying new wines when he travels so I knew wine would be the best gift I could bring him. But because I was nervous, I made sure I did my research and checked to see how other people tried to carry wine in their checked package. After doing some reading and perusing different products on Amazon, I decided to purchase the Vinolock Reusable Wine Bottle Protector (6-Pack) for $19.95.

Here are some of the features about the Vinolock protector that helped me make my decision: 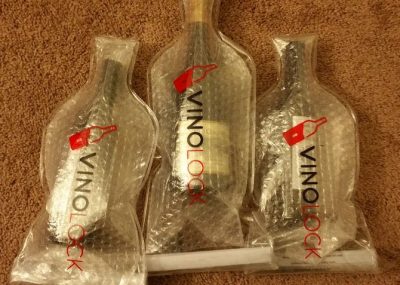 Even though I liked what I read about the Vinolock bags, and despite how sturdy they appeared, I still ended up wrapping the end where the bag closes in clear plastic packing tape—because I’m a chicken. However, I’m happy to say that my extra-care/paranoia was not needed.

Despite the fact that my suitcase was tossed through the air to land on the conveyor belt at the check-in counter in San Diego—and probably suffered all sorts of abuse throughout its journey to Seoul—I retrieved a bag that had no wine stains or liquid dripping ominously out from the zipper. When I got to Yeondong’s house I threw open my bear of a suitcase and cried out in delight, “It’s aliiiive!” We both had a good laugh at my antics and I’m happy to say that I was able to safely deliver my gifts to my dear friend and her family.

Overall, my experience using the Vinolock was a positive one. I would recommend it to a friend wanting to travel with wine in their checked luggage; so, if you ever decide you want to try packing wine in your luggage, a protective bag like the Vinolock may be something you want to use. Just in case. 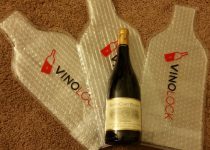 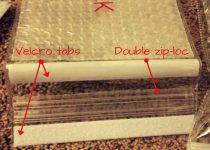