Our Global Gals Food and Wine Tour of Italy

Global Gals had the amazing opportunity to spend 12 days in Northern Italy on the “Food & Wine Tour: Northern Italy & the Italian Riviera.” Global Gals Karen, Carole, and Colleen had always dreamed of touring Italy, but never had the opportunity, or the time, to book it. That’s why, when the Global Gals Italy trip was announced, they pounced on the opportunity! During the tour they stayed in five different cities—Turin, Santa Margherita Ligure, Bologna, Verona, and Venice—and traveled to different wineries, villas, and famous sites in between. 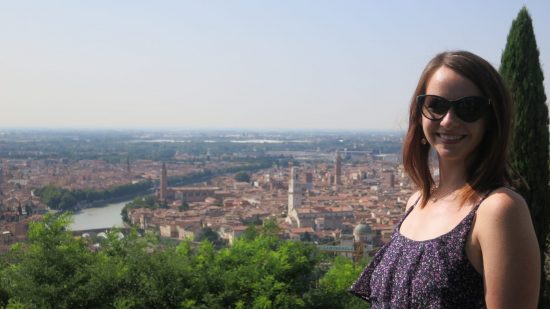 Colleen had been traveling by herself for a couple months prior to the trip, so it was a wonderful change of pace to be able to travel with her family and other Global Gals from around the world! They spent almost two weeks eating their way through Italy and the trip itself was filled with tons of activities and built-in free time. This was helpful because the gals could relax and do their own thing when they wanted. One day, the group even made a quick trip to Florence!

The Food and Wine Tour started in Turin, where they stayed in a magnificent hotel that used to be a Fiat factory. Turin, the fourth largest city in Italy, offered lots of sights, opportunities for shopping, and great food. At every city they traveled to, the gals had a very knowledgeable tour guide to lead them around and point out the best restaurants!

Carole’s favorite part of the tour was the wine! “I loved going through the less traveled cities when our bus went off the beaten path,” she said. “I especially loved Dozza in the Bologna region of Italy. It was a nicely preserved medieval village and we went to a cave-like basement where the sommelier presented us with wine varieties specific to that area. We had a Pignoletta, Sangiovese, Albana and a Lambrusco.”

One of Colleen’s favorite days of the tour was spent at Cinqueterre. “My mom and I were the two brave souls who opted to hike between two of the villages. It was incredibly hot outside and the hike took almost two hours, but the views were breathtaking. Adding to our fun, along the path we met people from different countries and even a man selling homemade limoncello.”

While they were in Bologna, the Global Gals went to a chef’s home, where she and her husband taught them how to make homemade pasta! Afterwards, surrounded by a beautiful vista, they got to eat their creations along with plenty of wine to drink.

Another great experience was visiting Verona, famous for being the setting for Shakespeare’s “Romeo and Juliet.” If you’ve watched the movie, “Letters to Juliet,” you’ll be familiar with the group of women who read every letter you post to them. Of course, Colleen took advantage of the opportunity and sent a letter to Juliet!

“It was so neat walking on fossil-embedded marble sidewalks in Verona and knowing they have been walked on for centuries,” described Karen.

They ended their adventure in Venice, which was very picturesque. The Global Gals got to see a glass blowing demonstration and rode around the city on a gondola!

Colleen said, “My waist was a little thicker by the end of the tour, but my list of experiences and connections is longer. I feel very fortunate to have been a part of an adventure that made many women’s travel dreams come true.”

To sign up for the next Global Gals Trip, check out our Trips page!